Arjuna
1If you consider knowledge superior to action,
why do you urge me to commit this terrible deed?

2You confuse me with this conflicting message.
Tell me for certain just one thing
that will lead me to the greatest good.

Krishna
3O blameless one!
As I have proclaimed in the past,
there are two ways to lead a fulfilling life:
the path of knowledge and the path of selfless action.

One does not become serene
by merely giving up work.

5Nobody can remain passive
even for a moment.
Everyone is helplessly drawn into action
by inborn, natural impulses.

6One who sits idle
restraining the organs of action
yet mentally broods over sensations
is a hypocrite who has fooled himself.

Organs of action are: mouth, hands, feet, genitals, and anus.
One who sits idle fools himself into thinking that he is not acting.
7A person excels when
he disciplines the senses with the mind and
engages the organs of action in work
without getting attached to sensations.

A recurring idea in this chapter is ‘working without attachment’; it refers to doing work merely as a duty and being detached from the possible outcomes.
8Do the work you are supposed to do;
certainly it is better than laziness.
Even the basic maintenance of your body
is impossible without action.

9Humans are bound by their actions
except when they are performed
for the sake of yajña.
Thus, Arjuna, do you work,
free from attachments,
in the spirit of yajña.

Here, yajña means ‘an act of self-dedication’ or ‘service above self’. It is also an act of worship; so the message is ‘do your work as worship’.
10Long ago, Prajapati, the lord of creatures
brought forth human beings
with the spirit of yajña, and said:
“By this, you shall grow!
May this grant you all your desires!
11By this, you nourish the devas and
they will reward you in return.
By nourishing one another
you shall attain the supreme good.
12Pleased with your selfless service,
the devas will fulfill your wishes.”

One who enjoys those gifts
without giving back anything in return
is indeed a thief.

Here, ‘this’ refers to ‘spirit of yajña’.
Devas are divine forces that reside in heaven. The elements and forces of nature such as wind, water, fire, earth, space, time, sun, moon, stars, planets, rain, oceans, mountains, plants, animals, etc. are also personified as devas. We have to nourish and respect nature if we want to be nourished by it and more importantly, for natural goodness to prevail. Devas are the embodiment of natural infrastructure. We cannot work without the infrastructure in place, so we should dedicate a portion of our gains for its maintenance.
13Wise ones eat the food that remains
after being offered to yajña;
thus, they are released from all evils.
Wicked ones prepare food for their own sake
and indeed live on sin alone.

In the process of procuring our food, to some extent, we cause trouble to nature and also to other beings. So we purify the food by offering it to the supreme and then eating it with a sense of gratitude. Even if we eat a dry leaf that fell on its own accord, we must not do so with a sense of entitlement.
14Living beings are sustained by food,
food comes forth from rain,
rain is caused by yajña, and
yajña is born out of action.

The idea of ‘yajña causing rain’ is perhaps a reference to the maintenance of the natural cycle.
15This action originates from brahman,
which is the manifestation of the imperishable.
Therefore the all-pervading brahman is
always established in yajña.

Brahman is the supreme being.
16The wheel of life is thus set in motion.
Indulging in sensual pleasures,
one who violates this natural order
lives in sin, thus wasting his life.

Cosmic order of the universe is rooted in the principle of give and take.
17But for those who rejoice solely in the atman,
and are satisfied with the atman,
nothing remains to be accomplished.

Atman is the inner, higher self. ‘…nothing remains to be accomplished’ indicates that such people don’t work for any gains since they have already found satisfaction within. 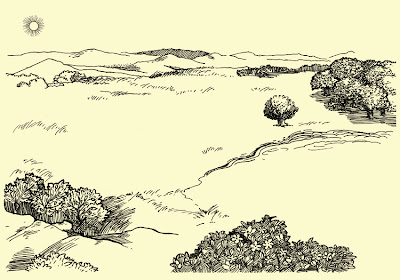 18They have nothing to gain by performing action
and nothing to lose by renouncing action.
They are not dependent on anyone for anything.

19Therefore, do your work with a spirit of detachment
and you will attain the highest level.

20Janaka and others attained perfection
by just doing their work,
for the welfare of the world.
You too should work like them!

Janaka was a king of Mithila (a province in Northern India) who was hailed as a rajarishi, who is both a king and a sage.
He appears in the Brihadaranyaka Upanishad and also in the Ramayana (as the father of Sita).
21A great man sets an example by his actions.
The whole world follows the standard that he sets.

The three worlds or the three ‘realms of existence’ are: the earth, the heavens, and the skies. The three realms may also refer to the past, the present and the future.
23Indeed, if I fail to work tirelessly,
humans would blindly follow my example
and sit idle without working.
24If I did not work, these worlds would perish!
I would be the cause of confusion and chaos;
I would be the one to destroy these beings.

25The ignorant ones work for personal benefit
but the wise should work for the welfare of the world.

26The wise should not, however,
discourage the ignorant ones
who are attached to action.
The wise should inspire them
to learn detachment,
while they continue
to work selflessly themselves.

The wise should not be hasty in trying to correct the ignorant ones but should allow them to relish activities in their own way; sooner or later, they will realize the joy of working without selfishness, either on their own or from looking at the wise.
27All actions are driven by the gunas.
One who is deluded by ego thinks:
“I am the one who is doing”.

Gunas refer to the inherent traits of a person.
28One who has true insight into
the interplay of guna and karma,
and how they are influenced
by the collective nature of society,
does not get entangled.

Here, karma refers to the different spheres of action.
The world is always in motion and thus, always changing. Most of us are a part of society and are influenced by it. Our customs, mannerisms, and practices adjust themselves to our surroundings if we let them follow a natural course. But if we are perturbed by changing times and cling on to practices that are not applicable today, then we are bound to be confused.
29Those who are fooled by the gunas
are attached to the actions caused by them.
The wise should not disturb such fools.

They are deceived by the physical world into thinking that the ultimate is what they can perceive through their senses.
The original has: “those with perfect knowledge should not perturb the dull-witted ones who have imperfect understanding.”
30Dedicate all your actions to the supreme.
Focus your mind on the supreme.
Free yourself from possessions and desire,
cast off your mental fever, and
engage in the battle.

Dedicating work to the supreme basically refers to invoking a higher purpose, a greater meaning for our seemingly mundane work. 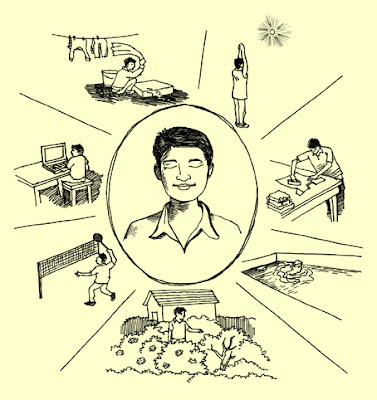 31Those who earnestly practice
my teaching without finding fault
are also released from actions.

The teaching here is: “Do your work and respect the greater purpose!”
32But those who condemn my teaching and don’t follow it
are utterly deluded, lost, and mindless.

34When senses encounter sensates
indeed Likes and Dislikes arise.
One should not be swayed by them
for they are obstacles in the path.

35Excelling in one’s own dharma,
even if it is less glamorous
is better than trying to excel
in another’s dharma.

Here, ‘one’s own dharma’ refers to ‘work in tune with one’s inherent nature’. One should be natural, free from deceit, and true to oneself. By staying close to what we are intrinsically good at, we attain personal success and also become valuable to society; see 18:45-48.
It is better to die
upholding one’s dharma;
following the dharma of others
is worse than death.

Leading a life doing things against our true nature and imitating other people, is worse than death.
Arjuna
36What is that powerful force
which compels a man to sin
though he doesn’t want to be sinful?

Krishna
37It is Desire,
leading to anger;
it arises from rajas.
Unquenchable and corrupting,
it is an evil enemy indeed!

‘Desire’ indicates selfishness, lust, and greed. Unfulfilled desires lead to frustration and anger.
38As fire is enveloped by smoke,
mirror is covered by dust, and
embryo is enclosed in the womb,
wisdom is veiled by Desire.

39The insatiable fire of Desire,
indeed a perennial enemy,
veils the wisdom of even the wise.

40Desire is seated in
the senses, mind, and intellect.
Through them it deludes people
by eclipsing their wisdom.

Desire leads to delusion and ruin; see 2:62-63.
41Thus, control the senses first
and then shatter Desire,
the sinful destroyer of knowledge and reason.

43Thus, knowing that
atman is higher than intellect and
subduing the outer self by the atman,
defeat that formidable foe
appearing in the form of Desire.