Salutations to the supreme lord,
the teacher of the world, and
the source of eternal bliss!

Dhritarashtra
1Sanjaya, tell me what is happening
in the sacred land of Kurukshetra,
where my people and the Pandavas
have assembled, eager to fight. 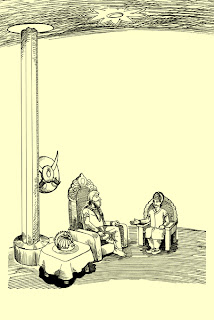 Sanjaya
2King Duryodhana saw the Pandava army
drawn up for battle;
then he went to his tutor Drona
and spoke these words.

3Respected sir,
look at the mighty Pandava army
arrayed in battle formation
by your talented student,
the son of Drupada.

4Their army has many great archers and heroes
who match Bhima and Arjuna,
such as Yuyudhana, Virata, and the mighty Drupada,
5Dhrishtaketu, Chekitana, and the valiant king of Kashi,
Purujit, Kuntibhoja, and the best of men, Shaibya,
6the courageous Yudhamanyu, the brave Uttamaujas,
Abhimanyu, and the sons of Draupadi.
They are all maharathas.

A maharatha is one who is skilled in warfare and
can fight ten thousand warriors at once.
7Likewise, O best of men, also take a look at
the distinguished warriors on our side.
I shall briefly name the leaders in our army.

8Besides yourself, Bhishma, Karna,
the victorious Kripa,
Ashvatthama, Vikarna, and Bhurishravas;
9there are many other heroes armed
with a variety of weapons,
and each skilled in the art of war.
All of them are prepared
to give up their lives for my sake!

Selflessness has always been an important part of the Indian ethos. Therefore, Duryodhana’s ‘my sake’ is an aberration;
it is a reflection of his bloated ego.
10Our army led by Bhishma seems inadequate,
whereas their force led by Bhima looks sufficient!

Duryodhana is envious of Bhima’s strength and courage.
Thus, he sees Bhima as leading the Pandava army although it is led by Dhristadyumna.
Duryodhana’s grand description of the Pandava army implies that
he thinks they are stronger, although they are lesser in number.
This verse could also mean:
“Our army led by Bhishma seems unlimited,
whereas their force led by Bhima looks limited”
but given the context, we have preferred our version.
At this point, Duryodhana addresses his side:
11Positioned in your designated places, in every move,
give maximum protection to Bhishma!


Having heard Duryodhana’s words,
12to cheer him up,
Bhishma, the grandfather of the Kurus,
roared aloud like a lion and
blew his conch with full power.

The blowing of a conch shell signals the beginning of an event.
13At once, conches, kettledrums, cymbals,
soft-drums, and trumpets resounded
causing a lot of noise and tumult. 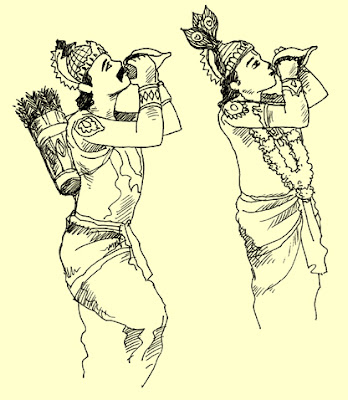 14Then, Krishna and Arjuna
seated in their mighty chariot
drawn by white horses,
blew their divine conches.

In those days, warriors would blow conch shells to announce the start of battle. Each warrior had his own uniquely qualified conch shell, which was either earned as a trophy or was obtained as a gift.
15Krishna blew his conch Panchajanya.
Arjuna blew his conch Devadatta.
Bhima, known for his terrifying feats,
blew his huge conch Paundra.
16King Yudhistira blew his conch Anantavijaya,
Nakula blew the Sughosha, and
Sahadeva blew the Manipushpaka.

17,18King of Kashi, the supreme archer,
Shikhandi, the mighty warrior,
Satyaki, the invincible,
Dhrishtadyumna, Virata, Drupada,
the sons of Draupadi, and
the strong-armed Abhimanyu –
each blew his conch one by one.

19That dreadful sound echoed through earth and sky,
shaking the very spirit of the Kauravas.

20Arjuna looked at the Kaurava army arrayed in battle
and lifted his mighty bow,
preparing himself for the clash of weapons
that was about to begin.
21Then, Arjuna told Krishna:

Place my chariot
between the two armies
22so that I may take a good look
at those with whom I must fight
among these battle hungry warriors.

The great warriors would choose to fight only with equals.
23I would also like to see all those
who have eagerly joined the battle
to please the wicked Duryodhana.

Sanjaya
24As per Arjuna’s request,
Krishna placed their magnificent chariot
between the two armies,
25right in front of Bhishma, Drona
and all the kings of the world.

Then, he said:
Arjuna, look at the Kurus
who have assembled here.

26There, Arjuna saw
grandfathers, teachers,
uncles, cousins, nephews,
sons, grandsons,
27and friends in both armies.
When he took a closer look at
his relatives ready for battle,
28Arjuna, the son of Kunti,
overcome by a sudden burst of pity,
spoke in despair:

Krishna,
when I see my own people
eager to fight us,
29my limbs grow weak,
my body trembles,
my mouth turns dry,
my hairs stand on end,
30my bow slips from my hand,
my skin burns,
my mind whirls, and
I can barely stand.

Arjuna’s pity was misplaced sympathy that led to the weakening of his mind. Interestingly, Arjuna refers to even his opponents as ‘my own people’. Compare this with Dhritarashtra’s distinction between the two sides in 1:1.
31I see only bad omens;
I can’t see any good coming from
killing my own people. 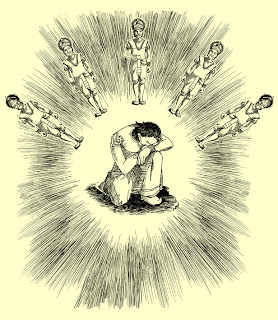 32O herder of cows,
I don’t fancy victory, pleasure, or kingdom.
What is the use of this kingdom, happiness, or even life?

Krishna was the chief of the cowherds and
was called ‘Govinda’, the friend of cows.
Arjuna refers to Krishna as ‘Govinda’
perhaps to highlight the latter’s simplicity.
33,34Alas! Teachers, uncles, sons, grandfathers,
nephews, and many relatives –
for whose sake we desire
kingdom, pleasures, and comforts –
the very same ones are standing here in battle,
risking their lives and riches.

35O Madhusudhana,
I know they are eager to kill me
but I don’t wish to kill them.

‘Madhusudhana’ is a title given to Krishna
because he killed a demon named Madhu.
I would not kill even for
the lordship of the three worlds,
let alone for this earthly kingdom.

The three worlds or the three ‘realms of existence’ are:
the earth, the heavens, and the skies.
36O protector of men,
what kind of happiness are we going to get
by killing the sons of Dhritarashtra?
Although they have incited the war,
we will only incur sin by killing them.

In a war, it is fair to kill the opponents.
Arjuna feels that this is immoral because
he is blinded by compassion for his relatives and friends.
In fact, it is against the code of a warrior to
run away from battle or refuse defending one’s honor.
37O kind one,
it is not fair to kill our relatives.
How can we ever be happy
after killing our own people?

38Overcome by greed, they fail to see the evil
in killing one’s own family and betraying friends, but
39we can clearly see the wrong in killing our kin.
Isn’t it better to stay away from this evil?

41When chaos reigns,
the women of the family are violated.
When women are violated,
anarchy arises in society,
O Varshneya!

‘Varshneya’ is a name given to Krishna because he was born in the Vrishni clan. Arjuna calls Krishna as Varshneya, perhaps to remind him of the importance of a stable social order.
Arjuna’s argument basically is: with the men-folk killed, the women are vulnerable to harassment by evil men; children born out of such unions will have a confused lineage and are subjected to hardships. When children have a chaotic life, the society will also be chaotic.
42Anarchy paves the way to hell
for the destroyers of the family
as well as the family itself.
Deprived of post-death rites,
the ancestors of these people
meet their downfall.

The post-death rites include an offering of cooked rice and water to ancestors after invoking their spirits with specific religious chants. To perform the post-death rites, one must know the past three generations of ancestors as well as specified protocol, both of which may be difficult when there is chaos in society. Arjuna laments that the ancestors, bereft of post-death rites, will fall to lower realms.
Some sections of orthodox Hindus accept as authority this flawed logic of Arjuna (that the actions of the current generation can affect the ancestors) and ironically, quote this verse to support their argument. 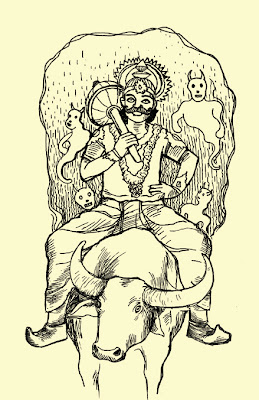 43The age-old practices
of family and community are ruined
by the terrible deeds of these killers
who create anarchy in society.

44Further, we have heard that
those who have lost family values
are consigned to hell forever.

This is another fallacy of Arjuna;
there is no such thing as permanent stay in hell.
According to Hindu belief, ‘hell’ is a transient place
where people are punished for their immoral deeds;
they stay till they receive the full course of punishments. 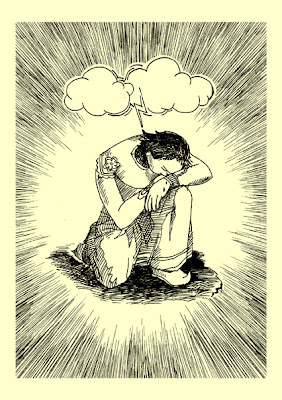 45That being the case,
by getting ready to kill our own people,
we are on the verge of
making a terrible mistake
merely out of our greed
for royal pleasures.

46It would be better
if the armed Kauravas
were to kill me in battle
while I remain
unresisting and unarmed.

Sanjaya
47Having said this,
Arjuna cast aside his bow and arrows
and sank down in his chariot,
overwhelmed by grief.


Religion is a mix of truth and tradition. Truth is eternal, and therefore always relevant. Tradition is contextual, and thus relevant for a particular place and time. Arjuna ignored truth and was pursuing tradition. This was perhaps the cause of his despair.