Our latest book The Easy Bhagavad-Gita: An easy-to-read version for busy people is so exceedingly easy that a 5000 year-old discourse feels intimate, accessible, and contemporary. And it is a great place to start if one wants to know about India’s grand heritage, religion, art, culture, philosophy, and spirituality.

You can buy the paperback in Canada | France | Germany | India | Italy | Spain | UK | US or the ebook at Smashwords. 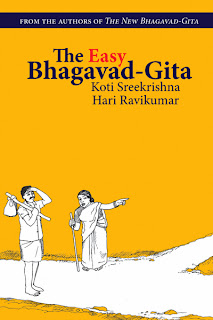 "In the morning I bathe my intellect in the stupendous and cosmogonal philosophy of the Bhagvat-Geeta...in comparison with which our modern world and its literature seem puny and trivial..."  - Henry David Thoreau

"When doubts haunt me, when disappointments stare me in the face, and I see not one ray of hope on the horizon, I turn to Bhagavad-Gita and find a verse to comfort me; and I immediately begin to smile in the midst of overwhelming tragedies." - Mohandas Karamchand Gandhi

"The hero of the Bhagavad-Gītā [Krishna] is doubly heroic: he is a warrior and a saint, a man of action and a quietest philosopher." - Octavio Paz

"A great landmark in the history of religion... The human race will never again see such a brain as his who wrote the Gita." - Swami Vivekananda

"The charm of the Bhagavad-Gītā is due to this idea of spiritualised activity which springs only from the highest motives... It is not merely the most read but also the most idealised book in world-literature." - Albert Schweitzer